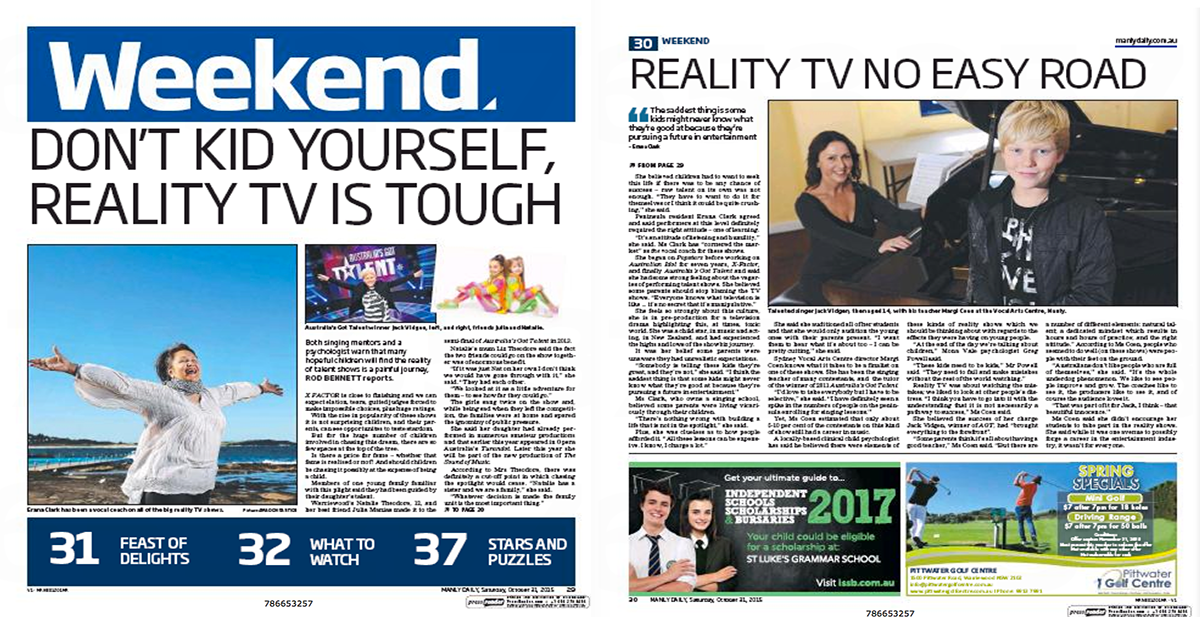 Both singing mentors and a psychologist warn that many hopeful children will find the reality of talent shows is a painful journey, ROD BENNETT reports. Erana Clark has been a vocal coach on all of the big reality TV shows.X FACTOR is close to finishing and we can expect elation, tears, gutted judges forced to make impossible choices, plus huge ratings.

With the rise in popularity of these shows it is not surprising children, and their parents, can see opportunites to taste stardom.

But for the huge number of children involved in chasing this dream, there are so few spaces at the top of the tree.

Is there a price for fame – whether that fame is realised or not? And should children be chasing it possibly at the expense of being a child.

Members of one young family familiar with this plight said they had been guided by their daughter’s talent.

Warriewood’s Natalie Theodore, 12, and her best friend Julia Manias made it to the semi-final of Australia’s Got Talent in 2013.

Natalie’s mum Liz Theodore said the fact the two friends could go on the show together was of enormous benefit.

“If it was just Nat on her own I don’t think we would have gone through with it,” she said. “They had each other.

“We looked at it as a little adventure for them – to see how far they could go.”

The girls sang twice on the show and, while being sad when they left the competition, the families were at home and spared the ignominy of public pressure.

She said her daughter had already performed in numerous amateur productions and that earlier this year appeared in Opera Australia’s Turandot. Later this year she will be part of the new production of The Sound of Music.

According to Mrs Theodore, there was definitely a cut-off point in which chasing the spotlight would cease. “Natalie has a sister and we are a family,” she said.

Whatever decision is made the family unit is the most important thing.

She believed children had to want to seek this life if there was to be any chance of success – raw talent on its own was not enough. “They have to want to do it for themselves or I think it could be quite crushing,” she said.

Peninsula resident Erana Clark agreed and said performers at this level definitely required the right attitude – one of learning.

“It’s an attitude of listening and humility,” she said. Ms Clark has “cornered the market” as the vocal coach for these shows. She began on Popstars before working on

Australian Idol for seven years, X-Factor, and finally Australia’s Got Talent and said she had some strong feeling about the vagaries of performing talent shows. She believed some parents should stop blaming the TV shows. “Everyone knows what television is like … it’s no secret that it’s manipulative.”

She feels so strongly about this culture, she is in pre-production for a television drama highlighting this, at times, toxic world. She was a child star, in music and acting, in New Zealand, and had experienced the highs and lows of the showbiz journey.

It was her belief some parents were unaware they had unrealistic expectations.

“Somebody is telling these kids they’re great, and they’re not,” she said. “I think the saddest thing is that some kids might never know what they’re good at because they’re pursuing a future in entertainment.”

Ms Clark, who owns a singing school, believed some parents were living vicariously through their children.

“There’s nothing wrong with building a life that is not in the spotlight,” she said.

Plus, she was clueless as to how people afforded it. “All these lessons can be expensive. I know, I charge a lot.”

She said she auditioned all of her students and that she would only audition the young ones with their parents present. “I want them to hear what it’s about too – I can be pretty cutting,” she said.

Sydney Vocal Arts Centre director Margi Coen knows what it takes to be a finalist on one of these shows. She has been the singing teacher of many contestants, and the tutor of the winner of 2011 Australia’s Got Talent.

“I’d love to take everybody but I have to be selective,” she said. “I have definitely seen a spike in the numbers of people on the peninsula enrolling for singing lessons.”

Yet, Ms Coen estimated that only about 5-10 per cent of the contestants on this kind of show still had a career in music.

A locally-based clinical child psychologist has said he believed there were elements of these kinds of reality shows which we should be thinking about with regards to the effects they were having on young people.

“At the end of the day we’re talking about children,” Mona Vale psychologist Greg Powell said.

“These kids need to be kids,” Mr Powell said. “They need to fail and make mistakes without the rest of the world watching.”

Reality TV was about watching the mistakes; we liked to look at other people’s distress. “I think you have to go into it with the understanding that it is not necessarily a pathway to success,” Ms Coen said.

She believed the success of her charge Jack Vidgen, winner of AGT, had “brought everything to the forefront”.

“Some parents think it’s all about having a good teacher,” Ms Coen said. “But there are a number of different elements: natural talent; a dedicated mindset which results in hours and hours of practice; and the right attitude.” According to Ms Coen, people who seemed to do well (on these shows) were people with their feet on the ground.

Australians don’t like people who are full of themselves,” she said. “It’s the whole underdog phenomenon. We like to see people improve and grow. The coaches like to see it, the producers like to see it, and of course the audience loves it.

That was part of it for Jack, I think – that beautiful innocence.

Ms Coen said she didn’t encourage her students to take part in the reality shows. She said while it was one avenue to possibly forge a career in the entertainment industry, it wasn’t for everyone.